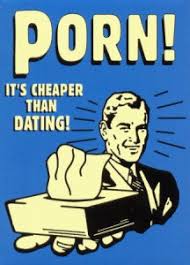 Opinion seems to be divided over every type of sex beyond that shared by a married man and woman. Views on pornography are no less divergent.

I find it interesting to think about how widespread and prevalent certain things are that are generally held to be ‘wrong’ in mainstream society’s view. The first examples that come to mind are things like drugs, prostitution and corruption.

Just as there isn’t a government or religion on earth that would promote such things, there virtually isn’t a major city in the world where you’re guaranteed to find all three in some form or another.

Pornography seems much the same. Few people openly admit to enjoying it (perhaps myself included), but it’s a multi billion dollar industry that is everywhere, widely available to all, and credited with driving such things as the DVD industry and the internet itself.

I guess that certainly happened to me.

All things considered though, I’m happy I did not meet the same fate watching tons of movies featuring ridiculous levels of violence and cruelty, or lives lost to drugs or gambling.

As has been often argued, this violence thing irks me in particular. Even in movies where violence is apparently “justifiable” (a favourite example is that ridiculous film Taken), I am appalled at the dehumanisation and gore.

On one hand, we have movies celebrating pleasure and life, on the other we have near glorifications of pain and suffering. I’m no pacifist, but our general acceptance of violence on TV while we reject pornography so vigorously is to me one of society’s more disturbing features.

Given however, that sex is as primal a human instinct it gets (basically ranking up there with eating, sleeping, defecating and so on), I suppose it’s not surprising how much time people spend thinking about it.

In fact, some would say our bodies are mere instruments created by our genes and DNA to achieve one single goal – their replication and continuation, as achieved by sexual procreation. In creating the perfect existence prolonger however, our genes appeared to have produced a being with many interesting side effects.

In any case, one of pornography’s primary goals is to provide sexual stimulation and TITilation (I wonder if there is indeed an etymological connection between these two words). This seems to me a noble endeavour, one that seeks to spice up an activity that can get – let’s face it – pretty darn boring.

Now, I’m all for monogamy for people who think it’s a good idea. One of the challenges you’ll face however, is keeping it exciting in the bedroom. No matter how sexy or skillful your spouse is, the danger of over-routinisation is perhaps one of the biggest, most dangerous wet blankets you will face.

As part of your battle against the legions of boredom, I might recommend perusing pornography for some new inspiration.

Now, I cannot stress this enough – especially to men. There’s a 99% chance that attempting to have sex with your female partner while watching pornography is a BAD idea.

As much fun as this sounds, this is something women don’t generally take kindly too, even though they may express some initial warmth to the idea and/or even enjoy watching the stuff.

(Once in a while you find a delightful exception who doesn’t care who you think of while you’re fucking as long as you’re fucking well, but such women are few and far in between)

That cardinal rule mentioned above, do feel free to explore – maybe together with your partner/s even – the wide world of pornography in search of new fantasies, new positions, new games, the keep things lively and exciting. Novelty is truly the name of the game when it comes to a healthy sex life.

They say the most potent sexual organ is the brain, and that’s what you gotta keep TITilated at all times. Yes, I made the same corny joke twice.

Boz Kamara is a pseudonym, used partly to protect friends, family and loved ones. Boz is a purveyor of extreme physical pleasure and devotee of unbridled depravity. Into girls. Someone who let soulmate slip away, and every day wonders if it was biggest mistake ever. Boz can be reached for fun and questions at [email protected] and has recently started tweeting @BozKamara.