This article is about extreme sex.

Now, there is no real limit to how extreme sex can get. At the high end of this spectrum is stuff that is immensely, immensely disturbing – certainly for me at least.

What I will cover here is what by my standards is extreme enough to be thoroughly scintillating, but within my comfort confines of weird, kinky stuff.

Those of you who may know who I am may want to reconsider reading on – it may display sides of me that may make you mildly uncomfortable. It turns out that I chose this to be the last article I will be writing in the series.

Who knows what darkness lurks in the hearts of men?

Let’s start by discussing dominantion and sado masochism. To some, this is pretty dark stuff. What would posses one individual to force his or herself on another? To willingly cause pain and violate another human being?

Perhaps equally puzzling is what kind of ‘freak’ would enjoy being violated in that way?

This is inconceivable to some, some who might liken these tendencies to the tendencies of people who brutalise and torture other human beings.

Is there a connection?

I’m probably not qualified to make a universally applicable comment on this matter. All I do know is that my abhorrence for any form of torture or causing real pain runs deep. As deep or deeper than any passion discussed below.

I can’t say for sure where the sexual pleasure one might take in dominating or violating another human being stems from. Maybe it does indeed stem from the same dark place as our other violent tendencies.

I do know however that many individuals in the world practice S&M type of sex in what – contrary to all outward appearances – is a healthy, safe and loving environment. An oxymoron? Perhaps, but I don’t think so.

Enthusiasts and practitioners have developed a thorough set of guidelines and rules to make such ‘play’ ultimately positive and safe.

All these and more are available online, but for this article let’s just do a short exploration. An interesting, simple example is the use of safewords. “No” or “Stop” is often not recognised as an actual instruction to cease or desist but rather an inducement to further activity and part of the excitement.

In its place, a safeword is identified to be used in case of one of the people involved truly and actually starting to feel panic. Such words are usually arbitrary and unrelated but easy to remember – perhaps an object like “aeroplane” or “guitar” or a colour like “purple” or “orange”. The rules are that use of such a safeword necessitates a complete cessation of whatever is going on – providing an escape clause which enables the enjoyment of the experience in complete freedom.

And enjoy it people seem to do – both dominants and submissives. I can’t really speak for them, the latter especially, but I think it’s fair to say that the sexual preferences of many women – and a fair number of men – may confound the expectations of society or people with certain beliefs about gender and so on.

To me the most important thing is to realise that different things get different people off, and that ultimately, all sexual activity should ideally be conducted in an environment of sincere mutual respect.

Let’s begin chronologically with what is perhaps the most recognised classic in this genre: a movie called The Story of O.

Originally a French novel, the story was adapted onto film by Just Jaeckin in 1975 and involves a mysterious mansion located in Roissy, where a woman, O, is brought to by her lover Rene at the beginning of the film.

It turns out this mansion is basically an academy of sorts for sexual slaves, where women are trained to be the perfect submissive – ready in every way to exist for one sole reason: the satisfaction of every single sexual desire and whim of the men in the mansion.

I’m sure suspicions of sexism start to abound, and there’s no doubt this caters primarily to a male fantasy. The original writer of the story, as it happens, was a woman. I don’t think there’s much point in me trying to justify anything or anybody here, I’m just here to tell you about a movie I like.

Soon after the opening of the film comes the scene of the proud and haughty O’s breaking in. Much like bootcamp, the idea is to break down the individual completely, before s/he can be properly retrained.

In this case, that breaking down involves a very memorable scene where a large group of men in a basement more than ready to mercilessly have their wicked way with her, followed by her first whipping. The rest of the film chronicles similar depravity.

By the end of the movie, O’s story seems to be one of achieving control by giving it up completely. It’s ok if this doesn’t make any sense to you – perhaps you have to watch the movie or read the book, and even then, you might still think its sexist bullshit. That’s ok too.

The Story of O is an icon. One that has inspired a considerable following.

So far, I’ve come across at least one place – chronicled in the website TheUpperFloor.com – that has achieved quite a similar atmosphere to the mansion at Roissy.

They seem to mostly hire female performers (“models”), and have a group of men who have been trained in the intricacies of domination. Their acts are videotaped, and available for all to see.

Within this lap of luxury, there’s bondage of every imaginable variety, restraints and devices that would shock most, and above all an atmosphere and mentality of domination and subservience that make for a very sexciting mix.

How wondrous it is that some people have actually managed to recreate with striking accuracy the type of surroundings, atmosphere and sex depicted in movies like the Story of O and Eyes Wide Shut.

The scene starts out with two girls, one of whom (the dominant one) has a male partner who is not home yet.

Just before the man returns home, the dominant girl sets the scene: the two of them are on the floor upside down, their backs and asses leaned up against each other, with their knees around their ankles. On their legs and asses are torn pieces of paper stuck to them using spit and on one girl, hair net stockings.

Written in bold on these pieces of paper are: 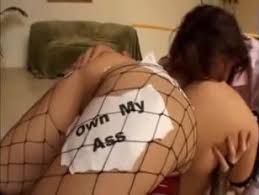 Boz Kamara is a pseudonym, used partly to protect friends, family and loved ones. Boz is a purveyor of extreme physical pleasure and devotee of unbridled depravity. Into girls. Someone who let soulmate slip away, and every day wonders if it was biggest mistake ever. Boz can be reached for fun and questions at [email protected] and has recently started tweeting @BozKamara.